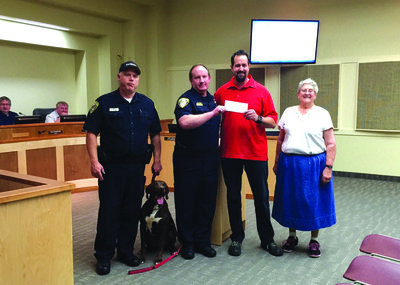 WOODS CROSS – As a police officer, when you go out on a call it’s nice to know your partner will back you up. It’s even better when that partner licks your face.

Woods Cross police officer Mike Daugherty is partnering with a new police dog, Bo, that the city acquired in October but until recently wasn’t paid for.

“Some dogs can run up to $10,000 to buy,” said Woods Cross Police Chief Greg Butler. “We became aware the dog was available and we got a great price. We presented it to the Woods Cross City Council and told them we’d look for donations.”

Daugherty found the dog and the owner agreed to let him take the German Shorthair Pointer to determine whether they would partner well while the city found the funds to pay for Bo.

Fortunately, local business owner of Flexpak and Boneyard’s Bloody Blend, Brian Kellen stepped up and recently gave the city the $2,500 it needed for Bo.

“Woods Cross has been great to us,” said Kellen. “I’m an animal lover and when they told me they’d been trying to raise money for a while, I thought, ‘why not step up to the plate?’”

In addition to the money, Animal Care Center has offered to give veterinary care at no cost as well.

Bo’s job will be sniffing out drugs and tracking people said Butler. The dog isn’t trained in bite techniques like some police dogs.

“He can track down a bad guy but can’t apprehend him,” he said. “But more importantly he could track a lost child or a senior with Alzheimer’s or a special needs child who wanders away.”

Butler said Daugherty is the best handler for Bo. “He worked with bomb dogs in Iraq and he’s a certified handler,” he said. “Mike was a dog handler in West Jordan and then we were fortunate enough to hire him.”

Overall, Butler believes Bo will be a great service to the whole city.

“It felt right to give back to the community,” Kellen said. “It’s been a great city to do business in.”